New Outlook: What to do in a slow-growth economy 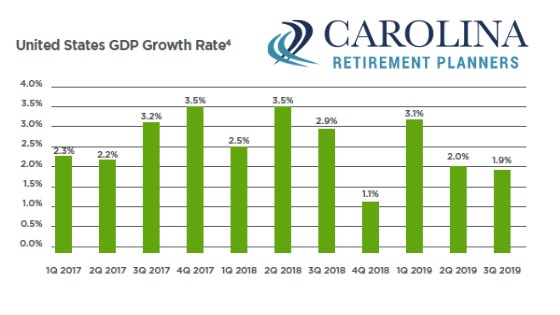 In the second quarter of 2019, the U.S. economy growth rate dropped to 2%,
down from 3.1% in the first quarter. Preliminary estimates from the Commerce Department show that third-quarter GDP growth reduced further to 1.9%.

Moving forward, analysts at the Federal Reserve Bank of San Francisco
(FRBSF) forecast a growth rate between 1.5% and 1.75%, signaling further
declining growth. For perspective, this projection is significantly lower than the most recent 10-year average of 2.4% and well below the 4% that was predicted would result from the Tax Cuts and Jobs Act of 2017.

As you can see from the accompanying graph, GDP is trending downward. While forecasts point to sustained growth in positive territory, which may help us avoid a near-term recession, current economic indicators that contribute to GDP growth are mixed.

There’s been a slowdown in household spending on both goods and services, particularly autos, clothing, footwear, recreation services and health care. This may correspond to a drop in personal income, which showed a significantly lower increase in the third quarter ($172.8 billion) compared to the second quarter ($244.2 billion).

However, Americans as least demonstrated a bit of fiscal responsibility in light of declining income. The personal savings rate as a percentage of disposable income increased in the third quarter from 8.0% to 8.1%.

“The U.S. economy’s growth rate is losing speed, prompting questions over how slow it can go and still avoid crashing into a recession.” 8

There is a difference between a declining economy and an actual recession, although it may not feel that way to anyone personally affected by the slowdown. For example: factory workers. The U.S.-China trade war has already caused the manufacturing sector to fall into a recession during the first half of the year. Thus far in 2019, Ohio, Michigan and Pennsylvania have eliminated a total of 17,700 manufacturing jobs.

Investors and consumers should be mindful that some of the key strategies the government uses to infuse growth into the economy may not be effective going forward. In terms of fiscal policy, legislators typically reduce taxes so that consumers have more money to spend. However, this strategy was already utilized in 2017 when the economy was in high gear. It inevitably contributed to the rise in the federal deficit to $984 billion for fiscal year 2019, a 26% increase over 2018. According to the Congressional Budget Office, this unsustainable upward trend has put the economy into a further precarious position, with little capacity for further tax cuts.

As for monetary policy, the Federal Reserve has already cut interest rates to historically low levels, so there’s not a lot of wiggle room for this strategy either. In fact, some analysts attribute sustained low interest rates to inflating stock prices, distending consumer debt and widening income disparity.

Tips for Investors During a Minimal-Growth Environment

Just because growth is unlikely to soar in the near term, there’s no need to panic. Both the economy and business sectors experience market cycles, and we’re overdue for a slow-growth period given the recent economic expansion and positive market returns.

With that said, it’s never a bad idea to review your portfolio to help ward off any pending issues that may be caused by today’s declining economic environment.

• Make sure you have a sizable and accessible emergency fund as your best defense against any financial strain.

• If you are in or near retirement and own securities that may be negatively impacted by reduced growth, consider repositioning them to create an issuer-guaranteed income stream.

• Also consider the merits of working longer in order to save more, potentially increase your Social Security benefits and provide your investments time to recover from temporary market declines.

• If you are a ways off from retirement, you still may want to do a portfolio checkup; however, consult with an advisor before making any significant changes.

• Diversify investments to minimize risk and capture growth opportunity from a variety of different asset classes and market sectors.

• Remember that a market decline presents a good opportunity to purchase equities at lower prices, so continue any dollar cost averaging strategies you deploy through automatic investing.

We have been seeing forewarnings and forecasts about market volatility and a pending recession for a while now, so slowing growth is not a shocking development. However, investors should be mindful that there’s not a whole lot the government can do at this point to jump-start the economy. It’s important for each investor to utilize strategies that best reflect his or her needs and situation.

Fortunately, your financial advisor is there to help you navigate any type of market environment. In many economic circumstances, like the one we appear to be entering, it’s often just a matter of staying the course.