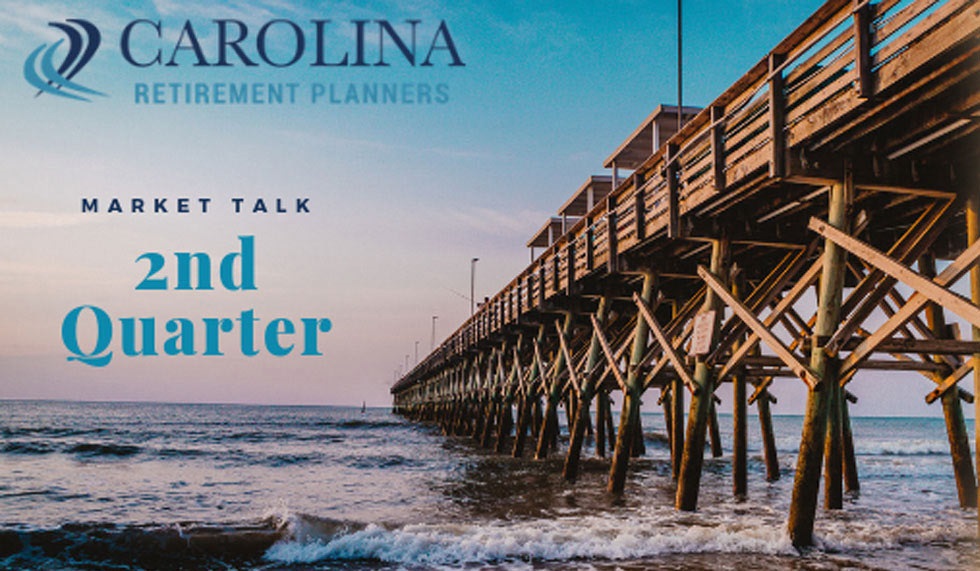 Remember the adage, “March comes in like a lion and goes out like a lamb”? It certainly held true for the market this year; we gently entered the second quarter following the first quarter’s relatively mild volatility and strong performance. But in late April, the lion roared again — and volatility returned in full force.

Mid-quarter, the Nasdaq and the S&P 500 closed down four weeks in
a row, while the Dow saw six straight weeks of losses. The market’s sudden negative outlook seemed to be driven by the on-again, offagain news of the trade deal with China. More than once, hopes rose on reports we were on the brink of a deal, only to be dashed by another postponement.

By late spring, the market seemed to push the trade deal from its collective mind to overcome the volatility, and June bloomed bright across U.S. equities. The markets were climbed upward with news from the Fed which signaled a shift in its stance on possible interest rate cuts. Despite a slight pullback during the last week of June, we still ended with a strong showing across equity markets, especially for a month that is historically lackluster.

While Q2’s volatility was a bit of a wake-up call, it wasn’t that big of a surprise; after all, volatility is to be expected in a healthy market. Perhaps the biggest surprise was the deluge of Q1 positive earnings reports. In the S&P 500, 76% of companies reported positive earnings per share that beat analysts’ expectations, and 59% reported revenues that exceeded expectations.

As we usher in Q3, there are a few blips on the radar to keep our eyes on. After trade talks fell apart in May, President Donald Trump and Chinese President Xi Jinping finally met in Osaka, Japan, on June 29. The two reached an agreement to resume trade deal talks. However, if you’re having a sense of déjà vu, don’t be surprised: the two reached a similar agreement at the 2018 G20 summit in Argentina. While the two countries have temporarily hit pause on new tariffs, many experts don’t see a deal being struck anytime soon.3 As Q3 progresses, we will have a much better idea whether or not a trade deal will actually happen.

The other major event that has everyone talking is the potential for interest rate cuts this month. The market bounce in late June was mostly bolstered by predictions that the Fed will cut rates as early as their next meeting on July 30-31. In fact, some experts are claimig a 100% chance that rates will be cut at the end of the month.

Why is the market so enamored with possible rate cuts? For one, lowering interest rates increases spending, and more individuals make big-ticket purchases such as cars and homes. This is especially important for the housing industry, which has lagged behind the rest of the economy for several months. Additionally, falling interest rates entice businesses to invest in equipment and human capital. This could lead to increased earnings — and increased earnings lead to increased equity prices.

One specific sector to watch this quarter is technology, as scrutiny intensifies on the big four: Google parent Alphabet, Amazon, Apple and Facebook for possible antitrust violations.5 The pressure on these companies will continue to mount, especially if Democratic presidential
candidates choose to make it an integral part of their platforms as they work toward 2020 primaries.

Speaking of the election, the 2020 races are starting to heat up, even though they’re more than a year away. Trump kicked off his official reelection campaign on June 18, while the Democratic field seems to get more crowded with every passing day. Although it’s still too soon to tell who will emerge as the frontrunner, markets may start to respond as it becomes clearer who might challenge Trump next year.

Although we’ve enjoyed mostly sunny skies in the first six months of 2019, we never know when a little rain might fall. The best thing investors can do right now is heed the Boy Scout motto: “Be prepared.” This is the perfect time to review your portfolio, shifting allocations as necessary to ensure they are still in line with your risk tolerance.

The other strategy investors should employ right now is simple but not easy: Stick to the plan. It can be tempting to deviate from the path when the forecast calls for storms. It’s important to stay focused on the bigger picture, taking small steps toward your goals. Your financial advisor can help guide you along the way.

Research the full array of student loans and repayment plans at the government website studentaid.gov.

The opinions in the preceding commentary are for general information only and are not meant to be predictions or an offer of individual or personalized investment advice. They also are not intended as an offer or solicitation with respect to the purchase or sale of any security. This information and these opinions are subject to change without notice. Any
type of investing involves risk, including the loss of principal, and there are no guarantees. AE Wealth Management LLC does not assume liability for any loss which may result from the reliance by any person upon any such information or opinions.

The advisory firm providing you this report is an independent financial services firm helping individuals create retirement strategies using a variety of investment and insurance products to custom suit their needs and objectives. Investment advisory services offered only by duly registered individuals through AE Wealth Management LLC (AEWM). AEWM and advisory firm are not affiliated companies.